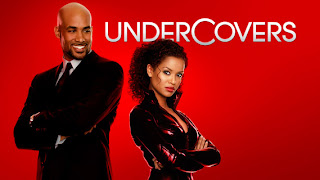 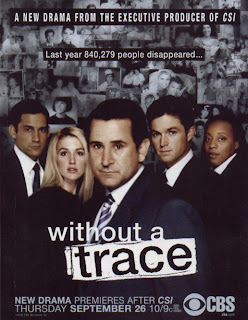 The Onion AV Club has a new-ish feature called, "A Very Special Episode". I enjoyed what I have read and heartily encourage you to read this entry. For those who don't wish to read it, I will summarize a point that raises my eyebrow, which is to say that this entry (rather rightly) takes to task this show and episode on the grounds of what Harlan Ellison called, "defanged dissent", which is essentially the flaccid attempt of a show to be relevant.

Once again, I enjoyed the article, but it missed a point, which, honestly, may be made in another post. While we can laugh and point derisively at the silly things folks did in 1972 in tv land, this still goes on!

Let's take the example of not a comedy, but a New York-based drama, "Without a Trace". The episode in question is "In Extremis", from 2002. The plot and SPOILER will follow. A doctor of Saudi Arabian descent, Anwar Samir, vanishes after a disagreement with his supervisor and an argument with his girlfriend. Given the story's and real life's proximity to 9/11, the episode is trenchant. There is nothing really wrong with the idea behind this story, but a few things bugged me about this show:

1. The main characters went to a mosque (or was it a rec center? Never mind) and they interview one of the people there during prayer and the fellow they speak to is short with them and unsmiling. He was interrupted during prayers, but the scene played to me to make the man out as a humorless fanatic, rather than a devout Muslim.

2. Samir is dating a White woman (more about why I'm bugged about this in a bit).

They find Samir, at the hospital. SWAT has been called. It turns out there is a bomb in the hospital and he is trying to get folks out. Nothing wrong there, but he, for some odd reason, is holding a gun. And, sure as shootin...um, sorry, sure as night follows day, one of the highly trained, never-crack-under-pressure trained snipers shoots and kills Samir.

The writer, Francisco Castro, who may be a fine fellow with political views that align with mine has basically written "Uncle Anwar's Bayt" as unsubtle as this comes across. The character is a doctor, which I have no bones about, since I enjoy seeing portrayals of people of color in high-level professions, but Castro continues to stack the deck:

I get it, I'm not supposed to like the guy, if I have a beef against Muslims. I get it, I get it.

He is overheard mentioning blowing up something, but he was talking about Shea Stadium and he was really stating that he hates the stadium and that someone should blow it up and build another one because it's in bad shape and a nurse is seen looking back at him, as if to say, "why, that raghead wants to destroy America".

The gist of this episode is not without merit. The current dust-up about what is or is not to be built near the former site of the World Trade Center makes some of this episode sadly relevant, however, I would say that not only does it come across with the subtlety of a flying mallet, it has the element of what writer James Blish called an "idiot plot". The real loose cannon is a fellow named Kamal Kahn, who not only has put a bomb in the building but has a gun as well! Yes, friends, we must all fear the Mad BomberShooter. One wonders if Kamal has gone to knife-throwing school to make sure that the folks that escape the explosions and bullets feel his special brand of Muslim steel justice.

The 1967 movie, "In the Heat of the Night" was an attempt to strike a similar blow for racial equality. This is a laudable goal, considering that Sidney Poitier is an articulate and charismatic (albeit sexless) lead. Keeping that in mind, it was not enough that he was a good cop and a decent man, it was necessary to lower the intelligence and likability of the White characters as well. This is a well-worn formula: in "To Sir, With Love", he is a teacher, but in a lower working-class neighborhood, in "A Patch of Blue" Poitier educates a blind southern White trash girl with even trashier parents, etc.

The challenge was and must be work that can put in a dollop of justice and fairness without beating someone over the head with it. Two examples that I recall do this are, were "Frasier" ("The Matchmaker") which very nicely dealt with homosexuality with a light touch and not a single stereotype (the gay character in question is gay,unapologetic, successful not comically effeminate and while he doesn't get the guy, he also takes his rejection with good humor) and "Frank's Place" ("Frank Joins a Club") in which the main character is given a choice of New Orleans Social Clubs to join. One is made up of working-class men that honor the coach drivers and the other is the tony Capital C club which historically discriminated against "colored" people, while allowing in Creoles (note which word has a Capital C).

Which brings me back to the column that sparked this one. Once again, I enjoyed it and found it thoughtful, I wonder if, in it's description of defanged dissent it has somehow fallen into it's own trap, taking to task a show that is thirty-eight years old, although it was repeated incessantly, while bemoaning that very few of his friends know of the groundbreaking improv troupe, "The Committee" (while not, oddly, mentioning the troupe that two of its alumni came from, which was Second City/The Compass Players).

The revolution will not be televised.

It may not be blogged, either.
Posted by Brian Phillips at 4:46 PM No comments: