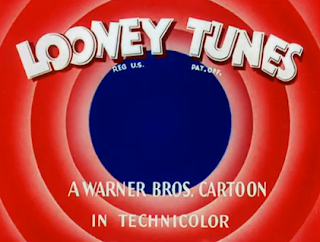 Years ago, I enjoyed reading "The Dictionary of Misinformation" by Tom Burnam.  It was "Mythbusters" without the sound and pictures and quite enlightening.  Here are some of the things that I have noticed over the years that might have gone in the book, had he only called me:

1. "Abidee-Abidee-Abidee-that's all folks!" - Let me preface this by saying that I know that many people don't find Porky Pig (voiced by Mel Blanc) funny.  I have a friend who stutters and he didn't care for him, primarily because he was CALLED Porky Pig.  I empathize.  Having said that, people misquote this Porky Pig line all the time.  His gimmick was that he would try to say one thing, give up and substitute something else.  Knowing that, when do you hear this?  AFTER a Warner Brothers cartoon.  Therefore, he is trying to say, "The End".  So, it should be spelled, "The-the-uh-the-the-uh-the-the-uh that's all, folks!"  Being the WB geek that I am, I know there are variants: Bugs Bunny sometimes shows up and says, "...and that's the end!" and in others, another character plainly says, "That's All, Folks!", no stutter at all.

Abidee is just...wrong.  It just sounds like that because Mel Blanc said it quickly.  Here is a fun fact: originally, Porky was teamed up with a little boy called Beans (get it?).  I've seen one of the Beans cartoons.  The funniest thing he says is, "I'm Beans, of the Boston Beans!".  Yes, that's as funny as he ever gets.

2. A favorite trivia question I like to ask about Little Richard is: what is the first thing that Little Richard sings in the song "Tutti-Fruitti?" Almost every writer, oldies lover or person who liked it when it came out will say, "A-wop-bop-aloo-bop-alop-bam-boom!"

And all those folks are wrong.  The phrase does indeed show up.  It shows up once...AT THE END!  The song starts out with him saying, "Wop-bop-aloo-bop-alop-bomp-bomp.  Don't believe me?  You can hear it here:

That is the original recording on Specialty.  When he re-recorded it for Vee-Jay, he sang it that way, too.

3. Alot - ...is a town in India.  If you see Joe Maphis play the guitar, the mandolin, a contrabass and sing, I think you would agree that he has a lot of talent.  Some of you may wish to have the Lord ALLOT you some musical talent.  However "alot" is not a word.

Joe Maphis sure could play though!  Watch this:

I am quite fetching in them, too.

Do you know any others?

Posted by Brian Phillips at 7:48 PM No comments: