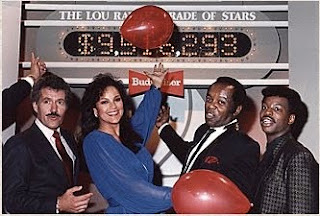 There has been a lot of ink spilled, and online, a lot of pixels lated over the inglorious ousting of Jerry Lewis from the Muscular Dystrophy Telethon. There are those that feel that the MDA have loused up royally by not allowing him to leave on his own terms, there are those that say Lewis was a horrible man to deal with and what he got is what he deserved, others (in particular a friend of mine who is in a wheelchair due to polio) felt that they didn't care for the way that MD sufferers were portrayed.

Ken Levine, in his wonderful blog mourns not only the exit of Lewis, but the loss of that era of showbiz and accompanying schlock factor. I agree. Where else would you see the tap-dancing alligator routine performed by a very bored-looking Charlie Callas? Heck, when would you see Charlie Callas? I would argue, that there are other telethons in my memory that are just as schlocky, even though their causes were and are laudable.

My brother and sister-in-law remembered watching the "Parade of Stars" with Lou Rawls and said that Rawls may have worshipped a tad too ardently at the Shrine of Bacchus and said "Yeahhh, Buddy!" ad nauseam. 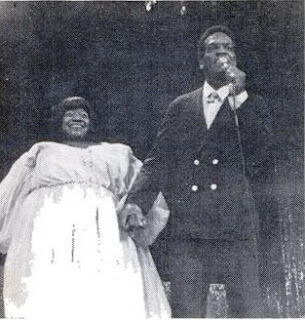 My favorite was the Sickle Cell Anemia Telethon, hosted by Nipsey Russell. Mind you, a telethon is not what you call a big-budget event, like the Academy Awards, since the idea is to RAISE money, but this show was very much the waif-at-a-bakery-window quality show. I can't recall where it was here, or the Parade of Stars, but I remember Douglas Grant (Zack of the Short Circus in the "Electric Company" and Eddie in "Good Times") singing "I Can't Stop Loving You" and I remember him being introduced as having performed and choreographed his routine.

He sang the song and stamped one foot. Choreographed?

The greatest feature of this telethon was the fact that when someone contributed money, they had someone ring a bell, Russell would then say, "Ring that bell, for Sickle Cell!", which, on the face of it sounds as if one wants to contract the disease, not combat it. I don't remember a tote board, so the bell and what Russell said was the record of the donations. Not surprisingly, the bell became quite intrusive. As some executive was speaking the bell was rung and this fellow said, "...and that beautiful noise should be stopped", at which point Russell said, "She's just ringin' that bell, for sickle cell!", in the hope of smoothing ruffled feathers. By the way, that's singer Big Maybelle (singer of the original version of "Whole Lotta Shakin' Goin' On", the co-composer Roy Hall and Jerry Lee Lewis' version came after, as well as "Candy" and "Gabbin' Blues") standing next to Russell.

For those of you mourning in Southern California, there's always the Chabad Telethon...

P.S. Lou Rawls, according to his website, he helped raise $200 million dollars for education. You can read about that here:

You can donate to Muscular Dystrophy here.
Posted by Brian Phillips at 6:32 PM No comments: