Five Reasons to Miss Sharon Jones or A Beginner's Guide to Grief. 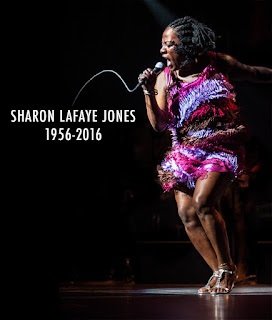 Why am I sad, as a music lover/collector/occasional musician about Sharon Jones? When you deal with older musics, you have several roads that you travel.

Number one is the most common. Number 2 is the stuff of much debate among crate-diggers, critics and some musicians. 3 is the stuff of biographical sketches and books. 4 is as well, and that encompasses the stereotype of the elders shaking their canes at the foolish youngsters.

Sharon Jones was number one. She was great. No, she wasn't the greatest singer, even in her own genre, but that does not detract from my point, especially since another talent, who also didn't have the best voice.

Sharon Jones was number one.

I've spent considerable time in my life collecting music. Over the years, you get used to disappointments. There are people that you cannot possibly see, folks that are a shadow of their former selves, talents that are still great, but neglected, people that are in your wheelhouse or pretend to be and are more popular than one feels that they should be, great work being done, but is buried by bad distribution and/or bad production, shifty management, mental issues and substance abuse.

I saw Chris Clark ("Love's Gone Bad") and while she looked great and she had a good time, her voice was shot. A friend of mine saw Thurston Harris at a mall, roaring drunk and not really able to perform. Eli "Paperboy" Reed was absolutely chewed up and spit out by Warner Brothers in their quest to find the male Amy Winehouse. I would have paid any amount of money to watch Guitar Slim enter a club riding on the back of another musician, playing his axe with an extra long cord. The Misunderstood's "Before the Dream Faded" is a document of a superior band that left behind amazing music and resulted, at the time in only ONE issued 45.

You can't say any of this about Sharon Jones. She had a good and sympathetic label, good production values on her recordings, good writing, a fine voice and an energetic stage show and national exposure. Songtracking has become something of an art nowadays. I heard "Black Monk Time" by the Monks in a Powerade commercial, "Who Knows?" by Marion Black was used in an episode of "Weeds". However, imagine my surprise and the elation of my internal cheerleading squad when I heard Jones and the Dap-Kings' version of Woody Guthrie's "This Land is Your Land".

I am of a certain age. I know full well that Jet Magazine used to list shows in which we made appearances. We NEEDED to see Black models because we needed to be told that we were aesthetically pleasing and worth something. Heck, I remember when it was just nice that we lived through a movie or a TV show. As of this writing, there is a Black President. Jones' achievements are muted somewhat by that, (for extremely good reasons!) but it cannot be stressed how big and significant Jones cultural contributions are.

The music scenes I deal with are quite esoteric and can even be quite catty. This person should be bigger, not this one, because they play the real whatever-it-is. This person/band is a carbon copy of that one. Their compositions are derivative, etc.

Sharon Jones and the Dap-Kings were quite rare. ALL of the elements came together:

1. They started well and got better album after album. At no time do you hear dilution or impending commercialism detracting from their sound.

2. The songwriting was top notch and MAN, did it sound good. There are few fussier about production values than myself. It's almost always better to see a group like this live, but their recordings are quite vibrant and a very just document of their legacy.

3. Daptone Records are easily obtainable and their roster is nothing to be sneezed at. Charles Bradley, Saun and Starr or Naomi Shelton are worth a listen.

4. She appeared on David Letterman's show, Conan O'Brien's show and she even was set to perform at the White House last month, which she had to cancel, due to pneumonia. She was a success, with decent album sales and YouTube views in the millions.

5. No less than James Brown gave her his blessing. In the documentary "Miss Sharon Jones" ("She warranted a D-O-C-U-M-E-N-T-A-R-Y!", go internal cheerleading squad, go!).

It was all in place. It was many of my dreams come true. I was glad that I saw her twice.

Bless you Ms. Jones. You showed us that it was possible. Thank you.

And that is why we should grieve.
Posted by Brian Phillips at 6:45 AM No comments:

"Dear friends, do not believe every spirit, but test the spirits to see whether they are from God, because many false prophets have gone out into the world."

Congratulations. If you are able to read this, you have a computer and internet access. This means that the above applies to us even MORE than it did before.

For "right" or "wrong" reasons, Donald Trump has won the Nation's Highest Office. I was discussing the portent of this with a man who has studied politics in far greater depth than I and while he called himself a "Democrat with a small d" he said that he was casting his vote for Trump and he went on to list reasons why he would not vote for Hillary Clinton. When I brought up the lack of political experience, he brought up FDR's keen business sense and suggested that "experience" is overrated.

How do we categorize this? Was the last eight years so ruinous that it required a correction? Was it too much to ask of the country to back a Black man and then expect folks to elect a woman? Was it poor vs. rich? Urban vs. Rural?

For me, it all boils down to, "Hail the Conquering Hero" by Preston Sturges. The plot is that a soldier (Woodrow) comes back from the Marines, not from combat, but for medical reasons before he sees combat. To spare his Mother's (a war widow) feelings, some Marines build up a gallant story about him.

The "Hail the Conquering Hero" Theorem: "Politics is a very peculiar thing...If they want you, they want you. They don't need reasons anymore... they find their own reasons."

When we elected President Barack Obama, we elected not only a brilliant man, but we voted for a cool, telegenic African-American man and his brilliant (and equally telegenic) family.

When we elected President George W. Bush, it was, in part, a repudiation of the sexual politics of the previous President.

Now, we have President-Elect Donald Trump and an overwhelmingly "red" government to look forward to.

Personally, I may lose in this proposition. I am genuinely concerned about the future of my Health Insurance, for example. However, who are among the biggest losers in this race?

The print media. The Trump camp might say media, but Ernst Lubitsch once said that the advent of sound in pictures meant losses in the ranks of actors that couldn't speak, directors that didn't know how to do more than direct traffic and writers who thought they could get by without writing dialogue. Lubitsch also said, though, that producers didn't lose anyone and that was where the talent was.

The internet has given us GOBS of information, without necessarily expanding wisdom, but it and the advent of Craigslist, destabilized the financial foundation of many newspapers. A Presidential candidate just won and not only was he endorsed by only one newspaper, he was denounced by USA Today, which NEVER has endorsed any candidate before. Almost every major poll on either side of the political spectrum had him pegged as losing.

That's is, well, shall was say, huge.

We may lose some of these organizations. Who will survive and what will supplant them? At one time a poll was taken in the country and the most respected journalist was deemed to be...

A man that had a comedy show based on current events. John Cleese, called it sad that there is a section of the populace that gets its news from "Daily Show"-type shows and I agree.

So, what do we do now? We do what I have said we must do in any situation.

However, we must do what the Bible says to do, "...do not believe every spirit". We must learn to sift through information and find wisdom.

We must tell our children that the level of discourse from this last electoral cycle does not represent this country at it's best. We must strive to be informed, for the devil is not in the details, he's in the glossing over.

And to you millions who held their noses rather than vote, I hope you can face your ancestors with a good enough excuse as to why you didn't.
Posted by Brian Phillips at 10:37 AM 1 comment: