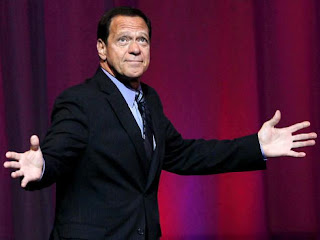 A fellow that I know via the internet called Joe Piscopo, "...one untalented fellow".

That, to quote Alan Bennett, is the GIST of what he said.

While I don't think that Piscopo is the great unsung comic genius of his generation, I think that Joe Piscopo was, and is quite talented, but he was scuttled by bad movie choices ("Wise Guys". This was a Brian De Palma comedy, a genre that he will not be remembered for and which he had not done to great effect since the 70's) and indifferent writing (witness his TV special).  Impressionists (his major forte; his wikipedia page lists 54 people!) have a particularly hard time, because the impressions don't change, yet the audience grows older.  Piscopo was sort of the pre-Phil Hartman (without the artistic talent, look at Firesign Theatre's "Fighting Clowns" LP cover) or the post Dan Aykroyd without the writing skills.  He had a good faux-announcer voice but Hartman benefitted from better writing as well as guest shots on "The Simpsons" and a great role on a great TV show, "NewsRadio".  Piscopo, as well as the rest of the cast at the time, had the following to deal with:

Jean Doumanian - the woman with the unenviable job of following Lorne Michaels at Saturday Night Live, who was given a whopping TWO MONTHS to assemble a new writing crew and cast.

Budget cuts -  Doumanian had to run the show with less than half the budget given to her successor.

The Jerry Lewis Effect - Dean Martin was a very talented actor and singer.  The press went Jerry Lewis-crazy when they were a team.  When "The Cosby Show" was a big hit, there were a few attempts to have lightning strike twice, so various shows came and went (Flip Wilson and Scoey Mitchlll [that's not a misprint - Ed.] were both given chances) but while shows with African-American leads were on the rise, everyone talked about Bill Cosby (I'm a fan, so I wasn't too bothered) but, lost in the mix were shows such as "Frank's Place" with Tim Reid, and "Gabriel's Fire" with James Earl Jones, in part, I think, due to the inability to deal with more than one show that had a primarily Black cast at a time.

Piscopo was doomed.  He was on the show at a time that the writing was VERY inconsistent even with a certain amount of talent.  Some of the other people on the show at the time were Laurie Metcalf, Julia Louis-Dreyfus and Gilbert Gottfried.

Eddie Murphy was and is so very talented (and so much in public consciousness), the clunker sketches that he was in have happily faded into memory.  Also, Murphy is a big enough star now, he no longer has to worry if his latest movie flops, because he can make another one.  THAT is star power rarely enjoyed by people of color.

Piscopo, like Jermaine Jackson and Scottie Pippen had the unfortunate timing of being in the proximity of a huge star, or star in the making.

Plus, I was at the Tower Records on Sunset Blvd. in L. A. and I stood behind him.  Had we been outside at the time, I would not have been able to see the sun.  Homeboy is im-MENSE and he might see this.

Actually, he seemed quite nice.

Possible idea for a future blog entry: Did you know that Eddie Murphy has never won an Emmy?
Posted by Brian Phillips at 1:41 PM No comments: