It's not my full-time job, but I am a DJ. I play vintage music, mostly Soul and Rhythm and Blues. It's not an act of defiance or bravery, it's just what I do.

I've done this several times in Charlottesville, to very appreciative crowds. I don't know where they came from, but I know where they were the nights we spun records. My memories of younger and older people, African-American and Caucasian, even, memorably, a woman in a wheelchair dancing to wonderfully obscure music brought out by my friends and I. No fights, no rancor, no death.

I'm a Christian. Yes, I play secular music (and some Gospel too!), but I am a Christian. The white nationalists that marched and those that sympathized felt they were doing this in the name of various and sundry reasons, the loss of a statue, the "threat" of diversity and some have the nerve to say that they were doing it with Christian motives. Then James Fields of Kentucky and Ohio came along in a car and drove through the crowd, which injured many and killed one person.

This person hurt my people. My Savior would not endorse this. He didn't ride into town and trample disbelievers. A 32 year-old woman is dead because of Fields. Because of these hateful people, Berke M.M. Bates and H. Jay Cullen are dead. 22 families' lives have been disrupted, because of Fields. He, just like Dylann Roof, was apprehended, alive.

Eric Garner's family must be relieved about this. 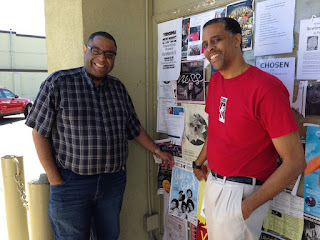 One of the things chanted was "blood and soil". I have walked on the soil of Charlottesville, as well as the streets where the attacks occurred and the horror of the bloodshed that has resulted from the action of fools shakes me to the core. We are at once, goading war with one country, taunting another, failing to unite with many as a result of our non-support of the Paris Agreement and at home, we awaited the word of the government that seemed to say that these unabashedly racist attacks were to be condemned, BUT softened it to say that "all sides" were a concern when bigotry is concerned.

There is no mistake here. None. These people came out with a clear and concise message to hate and they did. David Duke favorably invoked Trump's name, or brand, if you will, hoping that this protest was a turning point for the country.

@realDonaldTrump
"Condolences to the family of the young woman killed today, and best regards to all of those injured, in Charlottesville, Virginia. So sad!"

@realDonaldTrump
"Deepest condolences to the families & fellow officers of the VA State Police who died today. You're all among the best this nation produces."

One tweet came after the other. Three lives were lost. The above seems to imply that his depth of condolence changes. Three people are dead because of this atmosphere of hatred. Death is the deepest of tragedies. There is no level to it.

A quick note here: As ironic as this will sound, electronic communication is horrible for nuance.

Another small aside: Does anyone else find it a bit odd that a pro-white protest used tiki torches?

What am I to find, should I decide to spin records in Charlottesville, which I hope to? Will I see more dancers or will someone deem that I am part of the tragedy of diversity and try to harm me? My prayers go out not only to the families of the dead and injured, but also to those who stood up against the marchers.

However, I feel I cannot call myself a Christian if I didn't say this as well. I pray for the white nationalists, too. In the Bible, Saul persecuted Christians and instead of condemning him, God saw that he was fervent, but wrongheaded. He then became Paul and there can be no doubt that he became a true man of God. It is my prayer as well that someone among them will realize the error of their ways. I pray for Trump as well, since he is at the head of the country. I HAVE to. It's in the contract.

It's difficult, though. The atmosphere of this country has either changed, or it is merely being reported more than it was previously.  I do feel that it is either being fostered.