Why wait for the TV Guide?  Let's start reviewing new TV shows now!  Also, if you are here because you heard my guest round on the Podquiz Podcast 430, good on you!

Here is "Dads".  Go to this link, watch the trailer and come back:
http://www.youtube.com/watch?v=_yeLSEd8Ts4

It's nice to see Ribisi not play a fringe-y character.  He was great in "Friends" and "X-Files", so it will be nice to see if he can pull off being a straight guy.  Same goes for Seth Green.

Here is where we run into some old tropes: "Mystery Science Theater 3000" and "South Park" employ a similar comedy axiom: if you want to say something outrageous, don't give those lines to folks that look like your target audience.  MST3K had robots do the dirty work.  "South Park" has the kids do most of that.

This year, it's the older folks.  As evinced by "The Millers", older folks are getting to say the politically incorrect (one of these days I am going to post how I feel about the kvetching about the constrictions of political correctness) and the base.  Hey, it worked for "Golden Girls", so why not?

As with the Millers, parents show back up, with all of their faults, making their children miserable.  I like this cast, although Tonita Castro does seem to end up as a domestic worker more times than I'd like to see.  The chemistry in this trailer is better than "The Millers", but the writing is bugging me.

Well-worn cliches: Pop-culture (heh, sorry!) references.  They got it out of the way fairly early, but if you're going to make one that is twenty-six years old, either don't tell me what it comes from, or use a more famous quote, so you don't feel the NEED to tell me where it comes from.  "Modern Family" used one and didn't feel the need to explain it and I thought it was hilarious.  A party was being planned and two fellows come to the door that were hired to play animals.  With very deadpan expressions, this was the dialogue:

...and then the show continued.  You either get the reference and laugh, or you don't get it and, guess what?  You STILL laugh, because these guys have no energy at all in their delivery.  "Modern Family" didn't break an arm patting themselves on the back.  "Dads" did.

And we're on to stereotype two: smart Asian AND Asian-taking-pictures.

I consider it an insult if someone asks me a question, to which I say "no", at which point the asker decides to rephrase the question hoping for a yes, on the off-chance that I didn't understand.

I see very little difference between "Dads" and "The Millers".  I hope I'm wrong.

Posted by Brian Phillips at 7:42 PM No comments:

Why wait for the TV Guide?  Let's start reviewing new TV shows now!  Also, if you are here because you heard my guest round on the Podquiz Podcast 430, good on you!

Here are the Millers.  Go to this link, watch the trailer and come back:
http://www.cbs.com/shows/the-millers/ 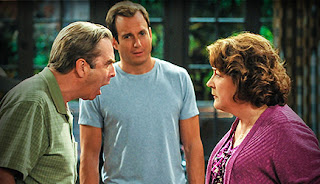 I am a fan of Margo Martindale ever since I saw "Justified", for which she won an Emmy.  I know she can act.

I am a fan of Beau Bridges.  I have long enjoyed his work, too.

If you saw this trailer, you might be convinced that neither of them knew how to act, just mug.  Will Arnett has gone from "Running Wilde" which was mercifully canceled, "Up All Night" which was a good show for the first season and well, "too many cooks" may best describe what happened there.  I don't see a bright future for this show.

I am not horribly prudish, but this managed to go for the gross-out gag one time too many.  The "you caught me in self-pleasure" was not a bad idea, but it went way over the edge.  We needn't return to the days of not being able to say a woman about to have a baby was pr**n*nt, but the ability to say this much should not end up with the writers making sure that they squeeze all of this in at the expense of plot, character or humor.  Free(r) speech is not cheap.

Pet Peeve: Yet another show with a person who has a job in the media.  There have been a LOT of shows that have people involved in broadcasting, writing, etc.
It makes one feel that these are the only jobs to have or, worse yet, we have a generation of writers who don't know that there is a wealth of people in this country who do NOT work in this work.

Greg Garcia is listed at the Executive Producer.  "Raising Hope" and "My Name is Earl" were no less bawdy, but both were decidedly funnier.

Posted by Brian Phillips at 7:20 PM No comments: