These Bands Can't be His Life! 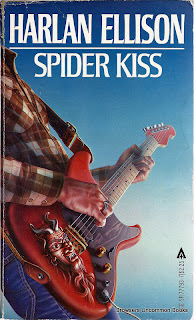 I am a fan of Harlan Ellison, a writer that has worked in many genres for many years.  The picture that accompanies this is his only novel dealing with the music industry.

Over on the Harlan Ellison Art Deco Pavilion, a forum that is occasionally visited by the man himself, sometimes the topics of discussion are way off-Topic, but enjoying music as I do, I couldn't resist this one.  Folks began to ponder how his story titles could be turned into band/artist names.

To which I say, these folks are all wet!

For me, what is MORE fun is finding titles that already are band names.  Thanks to allmusic.com, here are some of the titles I found.

1. DJ Punky + The Duke's Men Of Yale = Punky and the Yale Men.
2. Mouth (and MacNeil) who have split + Don Imus + Scream = I Have No Mouth and I Must Scream
3. There is a band from Ohio (Harlan is from Painesville, OH) called Ellison.
4. There are several acts that go by Harlan.
5. Mefisto in Onyx-There are bands called both Mephisto and Onyx ("Slam").
6. There is a band called Paingod and three bands called the Delusions = Paingod and Other Delusions
7. There is a Rap artist called, "Tiny Man" - "How Interesting, A Tiny Man"

Special notice: a band named Abdullah has a song called, "The Whimper of Whipped Dogs"

I hope you enjoyed reading this.  Clicking on the above links will take you to some of his work.  He writes far better than I, but he's had more practice.

Posted by Brian Phillips at 8:16 PM No comments: